This post builds on the previous one, talking about IPv6.

Router-id
If we don’t configure one, OSPFv3 will choose a Router ID in the same fashion as OSPFv2.

After configuring basic OSPFv3, I see the following:

But it was not enough. I still do not see neighborship established. Something was missing:

What if it was a mismatched OSPF network type on both ends of the link?

What if we delete the “frame-relay map ipv6..” command? Neighbor state goes “init”:

R4 sees all routes (not a default route only).

OSPF neighborship does not formLet’s “debug ipv6 ospf hello”. From the following, we know that OSPFv3 uses link local addresses in its conversations, and that we have here mismatched Hello parameters. We know that, in order for OSPF neighborship to establish, these parameters must match (in the Hello packet):
– area ID
– authentication
– Hello timer, Dead timer
– stub area flag.
So if for example routers have different OSPF network types, that mean they have different values in one of the aforementioned parameters.

Route summarization
Beware not to do the conversion from decimal to binary! ipv6 addresses are in hex! so we should convert from hex to binary.

– if you configure OSPFv3 and there’s no IP address on router, then IOS will ask you to set Router-ID manually:

Redistributing connected routes into OSPFv3
we delete loopbacks from being advertized as OSPF internal routes (on R1) and we’ll redistribute their addresses into OSPF:

We chose 300 because it is greater than any internal route metric.
Let’s see R2 routing table:

Routes are learned as O E2, just like OSPFv2 :)

Redistributing RIPng into OSPFv3
Quite simple, if we already know redistribution in IPv4. By the way, knowledge is always useful. We either use it exactly as it is, or we do analogies between what we know and what we’re about to learn.

Let’s see what R3 has learned:

Where is the 2026::2:/122 network? it is supposed to be a RIPng route, so it should be redistributed.
I found the answer to it with “include-connected” keyword: 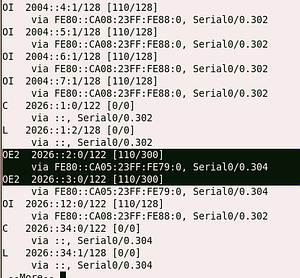 Whenever you need a refresher on your CCNA skills and at the same time review at your own pace, then I would recommend the Lazaro Diaz CCNA course.

Keyboard Banger is a network engineer from Africa. He has been working in network support and administration since 2008. He started writing study notes about certification exams and technology topics a couple of years ago. When he's not writing articles, he can be found wandering on technical forums.

Here is the material I ve used to study and pass the Cisco CCNP Routing and Switching exams. Be aware that I did not pass all exams on the first try. CCNP BSCI Study Material Read more…

According to Cisco documentation, IP SLA Responder is optional for the Cisco IP SLA UDP Echo operation. However, I experienced a different situation in my EVE-NG home lab. Topology I am using the same topology Read more…